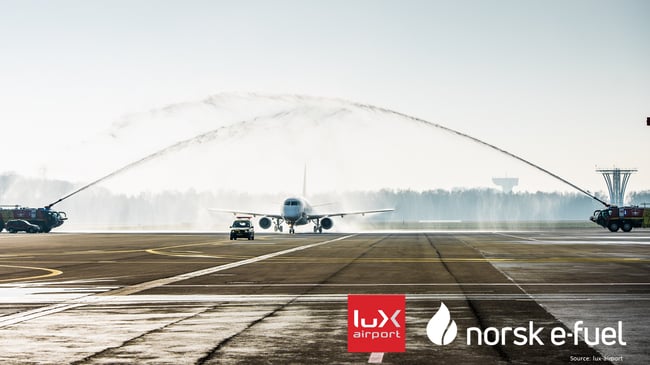 Lux-Airport, Luxembourg's equivalent to Avinor, is leading the airline industry with a ground-breaking investment that contributes to the start-up of Norway's first production facility for sustainable aviation fuel. With this, an actor of the aviation sector officially shows confidence in Norsk e-Fuels technology that converts renewable electricity, water and CO2 captured from air into jet fuel.

As a shareholder in Norsk e-Fuel, lux-Airport contributes to the start-up of the first production facility, with a planned start of production in 2024. The facility will be located in Mosjøen in Norway and will be able to provide between 50 and 70 jobs. It is planned to produce 25 million liters of fuel at the beginning.

"We are proud that lux-Airport with this investment shows confidence in our technology and production plans. Together, we will create a sustainable fuel that will realize a climate-neutral transport sector," says general manager Karl Hauptmeier in Norsk e-Fuel.

Norsk e-Fuel is one of the leading companies in developing e-Fuel production, with its experienced shareholders and relevant technologies. They are well-positioned to develop and achieve the required production scale for Power to Liquid (PtL) e-Fuel, which is the most sustainable form of sustainable aviation fuel (SAF) to reduce CO2 emissions throughout the product life cycle.

With this investment, lux-Airport joins the four consortium partners that make up Norwegian e-Fuel: Sunfire, Climeworks, Valinor and Paul Wurth.

Lux-Airport's investment in e-Fuel production underlines the strong commitment to supporting the goals of a climate-neutral aviation sector.

After obtaining the "carbon neutral" certification (level 3+) from ACI - Airport Carbon Accreditation, lux-Airport is expanding its environmental commitment with this investment. e-Fuel is an important component of SAF and will help meet the "Fit for 55" guidelines from the European Commission, aiming to reduce greenhouse gases by 55% by 2030.

Contributing to the EU's "Fit for 55" goals is one of the key elements in lux-Airport's sustainability initiatives, and the company will target its investments in projects that support this initiative.

The airport achieved certification as "carbon neutral" with the ACI Airport Carbon Accreditation program in March 2022 and showed the results of joint efforts from the airport's largest stakeholders.

Projects such as smart use of renewable electricity, optimization of heating, reduction of water use including recycling of de-icing water to reduce environmental impact, implementation of green areas to increase biodiversity, investment in smart LED lighting, use of electric vehicles, strengthening waste sorting and recycling contributes all to a more sustainable airport operation.

Norsk e-Fuel AS is a leading industrial consortium that has joined forces to create a sustainable fuel that will realize a climate-neutral transport sector, especially in industries that are difficult to electrify – such as the aviation industry. The company's first production facility will be located in Mosjøen, northern Norway, and will produce renewable fuel from CO2 and water using 100% Norwegian renewable electricity. The company is located at Snarøyveien 20, 1360 Fornebu, just outside Oslo.

lux-Airport is the operating company of Luxembourg airport. The airport provides direct flight services to many business and leisure destinations and is a major European cargo hub. lux-Airport employs more than 330 people.

Last ned pressemeldingen her (NO).

Interviews with René Steinhaus (CEO Lux-Airport), Carl Berninghausen (Chairman of the Board of Directors at Norsk e-Fuel) and François Bausch (Luxembourgian Minister of Transport) on local TV channel:
https://play.rtl.lu/shows/lb/journal/episodes/r/3283873
(in Luxembourgish and German, ca. minute 19:00)